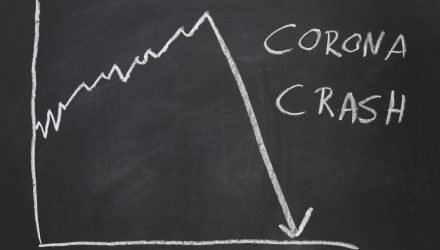 “It’s the fastest 20% decline ever,” Paul Nolte, portfolio manager at Kingsview Asset Management, told Reuters. “Every day there’s more selling, and just when you think you’re at capitulation, you’re not there yet. People don’t know how long this is going to go on, so they’re going to sell and walk away.”

Travel companies were among the hardest hit as global governments curtailed travel to contain the spread of the coronavirus contagion, with the U.S. issuing a rare ban on flights from Europe.

The Federal Reserve also tried to shore up the economy through more aggressive accommodative measures, but the looser monetary policy failed to arrest the pullback on Thursday. Beyond the Fed’s announcement, the European Central Bank also said it would issue cheap loans for banks and increase bond purchases. The Trump administration outlined plans to backstop the economy and certain sectors, the Wall Street Journal reports.

“We are beyond the logical, mathematical approach to things,” Steven Dudash, president of IHT Wealth Management, told the WSJ. “We’ve got complete overreactions going on because of the fear of the unknown.”

“When you see that, you can’t expect to see a logical response to interventions,” he added.

Several major negative news stories just piled on within a short time frame. For instance, along with a 30-day ban on most travel from Europe to the U.S., the National Basketball Association suspended its season indefinitely, and an increasing number of colleges halted classes.

“We had so many things hitting us all at the same time,” Tim Courtney, Chief Investment Officer of Exencial Wealth Advisors, told the WSJ. “With so many larger organizations and larger pieces of the economy now changing, it looks like life is going to be different for the next 30 or 60 days.”