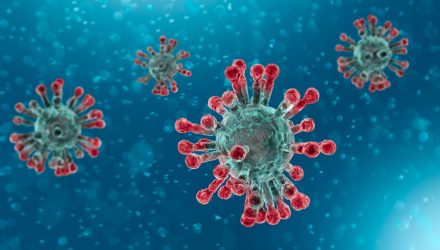 U.S. Stock ETFs Plummet on Spreading Coronavirus Outside of China

U.S. markets and stock ETFs plunged Monday on growing fears of a worsening coronavirus epidemic that is spreading outside of China.

Markets plummeted, with the Dow Jones Industrial Average erasing 1,000 points mid-Monday, and were on pace for the third consecutive session of losses as the novel coronavirus outbreak continued to spread and threatened the stability of the global economy. Concerns intensified over the weekend after a number of new cases in South Korea, Iran and Italy, the Wall Street Journal reports.

Investors are growing increasingly uncertain of the outlook as questions linger over how the contagion is continuing to spread as infections are emerging among those who haven’t traveled to China or come into contact with confirmed cases.

Several U.S. companies, including Apple, Procter & Gamble and Royal Caribbean Cruises, have already issued a downgraded outlook in light of the COVID-19 virus, warning that there will be a negative impact on their financial performances for the quarter.

“Clearly this selloff today is pretty dramatic and there’s no question that the selloff in the U.S. was precipitated by what’s going on in Europe,” Chris Zaccarelli, chief investment officer for Charlotte-based Independent Advisor Alliance, told the WSJ. “Fear has gripped the continent.”

The Group of 20 major economies has already warned that the coronavirus poses a serious threat to the global economy. In China, officials and economists have pointed out that the extended factory shutdowns in an attempt to contain the contagion could cripple global manufacturing and cause $1 trillion in lost output.

“Northern Italy, Switzerland, Southern Germany, and Austria form a big supranational industrial hub,” Hense added. “Should a lockdown in small areas of Italy be widened, there would be far more significant disruption for manufactures like German car makers in Europe.”