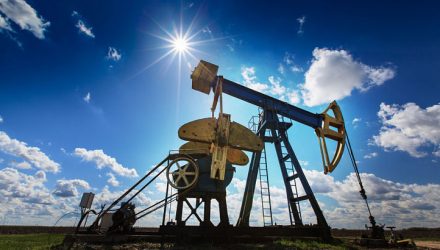 The United States Oil Fund (NYSEArca: USO), which tracks West Texas Intermediate crude oil futures, is higher by nearly 9% over the past month. While many oil market observers focus on the Organization of Petroleum Exporting Countries (OPEC) as a major market force, U.S. shale prices continue to be a potential hurdle for oil as it tries to add to its recent rebound.

Meanwhile, advances in U.S. shale oil production technologies are contributing the to supply surplus and weighing on any oil price gains. It has become much cheaper for the upstart U.S. shale producers to extract oil out of the ground, but the growth rate of U.S. oil product has also recently slowed.

Second-quarter earnings reports from U.S. shale firms “suggest staying power for a supply glut that’s kept world oil prices on a roller-coaster ride this year, even as OPEC nations vowed to reduce output. The optimism from the U.S. shale fields followed quarterly reports last week that showed major international producers including Exxon Mobil Corp. and Royal Dutch Shell Plc are also learning to make money at $50 a barrel, less than half the peak that crude reached three years ago,” according to Bloomberg.