You are at:Home»Equity ETFs»U.S. and European Union Avert Trade War 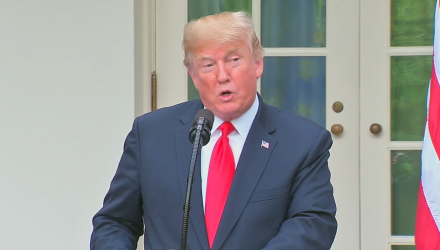 The spate of negative news stemming from trade wars got a temporary reprieve at the close of Wednesday’s trading session, as U.S. President Donald Trump and European Commission President Jean-Claude Juncker averted a trade war by agreeing on various concessions.

The Dow Jones Industrial Average staged a late rally, closing over 172 points from the previous day. The S&P 500 ended up 0.91% for the day while the NASDAQ closed over 90 points up on the day.

The European Union agreed to lower industrial tariffs as well as import more U.S. soybeans. In addition,  Europe will work closely with the U.S. to bring in more U.S. liquid natural gas export.

The rally broke open on reports that Trump and Juncker agreed to trade concessions after meeting on Wednesday for over two hours. Following the negotiations, Trump and Juncker held a joint press conference at the White House Rose Garden.