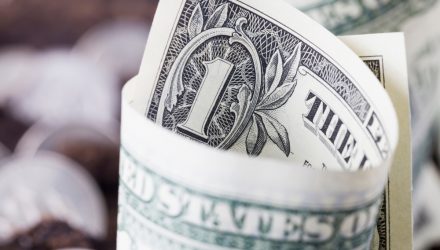 U.S. Dollar ETFs Have Been Outperforming

U.S. dollar exchange traded funds have been enjoying a great 2022, with the greenback on pace to hit two-year highs, as the Federal Reserve tightens its monetary policy, the U.S. economy maintains strong growth and geopolitical uncertainty overseas sends global investors toward steadier plays.

The Dollar Index has climbed 13 of 15 sessions to its highest level since May 2020, the Wall Street Journal reports. The USD has appreciated over 10% versus the Japanese yen in 2020 and more than 5% against the euro.

The stronger greenback has helped raise profits among companies that import cheaper goods abroad and strengthened the purchasing power of consumers buying from overseas. However, the appreciating USD has hurt large multinationals with a big global footprint since it makes their products less competitive abroad while increasing the cost of converting foreign revenue back into the U.S. currency.

Supporting the stronger dollar outlook, many anticipate U.S. growth to outpace the recovery in other global economies, especially with the Russia-Ukraine war fueling uncertainty in the Eurozone economies. Meanwhile, the Fed has signaled a hawkish monetary policy stance with multiple interest rate hikes ahead to curb inflation at a four-decade high.

“We have found investors are increasingly long the dollar and are adding more to the topside,” David Adams, head of FX strategy at Morgan Stanley, told the WSJ. “The key question is what is the global growth outlook versus the U.S. growth outlook over the next six to 12 months.”

U.S. government bond yields have also increased to multi-year highs as investors brace for the rising rate environment ahead. The higher rates have helped attract yield-hungry investors, which could help raise foreign demand for U.S. dollars.

“The dollar typically performs in two extremes: in a scenario of risk aversion, or in a scenario where the U.S. is a clear outperformer,” Kristen Macleod, co-head of global foreign exchange sales at Barclays, told the WSJ. “What we have seen over the past couple of months—since the Russia-Ukraine conflict kicked off—is the dollar is benefiting from a bit of both.”