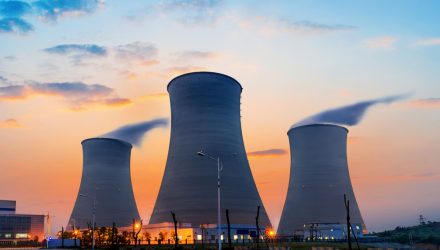 Due to Western sanctions on Russia in response to the invasion of Ukraine, many European countries have looked into alternative sources to secure their energy independence, bolstering the nuclear power outlook and uranium sector-related exchange traded funds.

Uranium sector-related stocks rallied Thursday as the United Kingdom turns to nuclear power to wean itself from Russian fossil fuels.

Energy prices have recently soared in response to supply issues stemming from the Russia-Ukraine war, which have caused many countries to seriously think about alternative energy sources.

“This is about tackling the mistakes of the past and making sure that we are set well for the future,” Johnson said at Hinkley Point C, a nuclear power plant under construction in southwest England. “And we are never again subject to the vagaries of the global oil and gas prices, and we can’t be subject to blackmail, as it were, from people such as Vladimir Putin.”

The U.K. has plans to build eight new nuclear reactors by 2050, or tripling U.K. production of nuclear energy to 24 gigawatts, contributing to a quarter of projected electricity demand.

“We’re setting out bold plans to scale up and accelerate affordable, clean, and secure energy made in Britain, for Britain, from new nuclear to offshore wind, in the decade ahead,’’ Johnson said. “This will reduce our dependence on power sources exposed to volatile international prices we cannot control.”