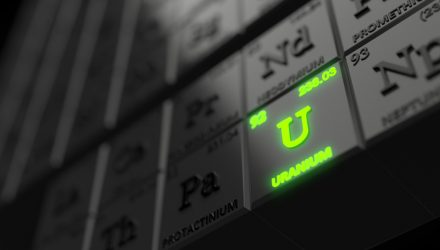 Uranium ETFs Have Been Strengthening on Russia Sanction Concerns

Russia enriches more uranium for nuclear power plants than any other country in the world, the Wall Street Journal reports.

As Western countries place sanctions on Russia and further isolate the country for its invasion of Ukraine, global nuclear-fuel supplies have come under strain with only a handful of countries providing the materials.

Republican Sen. John Barrasso of Wyoming, one of the main U.S. uranium-producing states, has already filed legislation to ban Russian imports, arguing that the dependence on foreign uranium imports is “simply unacceptable.”

Uranium prices have so far surged over 30% since Russian forces stepped into Ukraine as commodities broadly rallied and utilities try to secure supplies on fears that Western sanctions could further weigh on supplies.

A trade agreement currently limits U.S. dependence on Russian uranium to 20% of what domestic reactors need, but we can’t quickly fill the Russia gap in imports due to the complex supply chain that could take years to rearrange.

The Nuclear Energy Institute said it was assessing “the potential impacts of fuel disruption on the U.S. nuclear fleet.”

The U.S. plants would usually refuel every 18 to 24 months and plan refueling at least two to three years ahead, so there aren’t any real short-term fuel shortage concerns.

“I think that gives us time to react,” Maria Korsnick, the group’s chief executive, told the WSJ.

Nuclear power currently accounts for about 20% of U.S. electricity generation and 10% of world electricity, according to the World Nuclear Association.