You are at:Home»Equity ETFs»Uranium ETF Powers Up as Kazakhstan Cuts Output 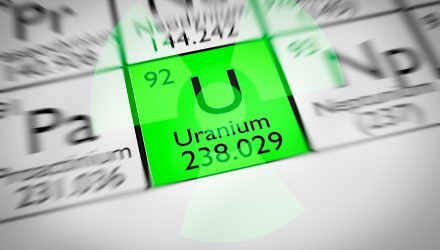 Uranium miners and sector-related ETFs surged Monday after Kazakhstan’s state-owned uranium producer Kazatomprom stated it will reduce production over the next three years in light of a global supply glut of the nuclear fuel.

Bolstering the uranium market, Kazakhstan said its state-owned uranium miner will cut production by 20% over the next three years. which amounts to 11,000 metric tons of uranium with the reduced output next year equivalent to 7.5% of total global supply, reports Henry Sanderson for the Financial Times.

“Given the challenging market conditions, and in light of continued oversupply in the uranium market, we have taken the strategic decision to reduce production in order to better align our production levels with market demand. We believe that these measures strongly underline our commitment to ensuring the long-term sustainability of uranium mining; a critical component in the generation of clean, carbon free electricity around the globe,” Galymzhan Piramatov, chairman of the management board at Kazatomprom, said.

Analysts at Cantor Fitzgerald said the three-year cut was a surprise since the company typically reveals production guidance on a year-by-year basis.