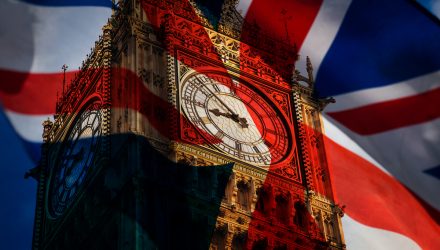 United Kingdom ETFs: It Will Get Worse Before Things Get Better

United Kingdom ETFs may continue to weaken as the Bank of England warned that Brexit uncertainty “intensified considerably” over the last month.

U.K.-related markets have been weakening as turmoil surrounding Britain’s divorce from the European Union intensified. With under 100 days to go before the final breakup, Prime Minister Theresa May has yet to gain support of her Conservative Party for the deal she struck last month with Brussels, Reuters reports.

In response, the Bank of England cut their forecast for British quarterly economic growth in the last three months of 2018 to 0.2% from 0.3% and warned that conditions won’t likely change in early 2019.

“Brexit uncertainties have intensified considerably since the committee’s last meeting,” the Monetary Policy Committee said in a summary of its December meeting. “These uncertainties are weighing on UK financial markets.”