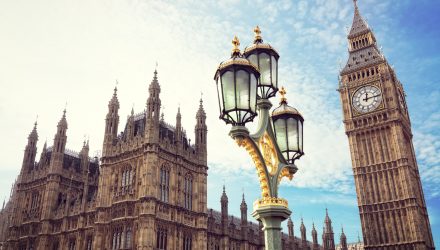 United Kingdom exchange-traded funds (ETFs) retreated on Monday as British Prime Minister Theresa May announced that the parliamentary vote to decide Britain’s Brexit decision to leave the European Union will be delayed.

May cited a bevy of gloomy forecasts for the decision to delay the vote, saying that she listened “very carefully to what has been said in this chamber and out of it.” With her premiership on the line as well as the stability of the government, May opted to “defer the vote scheduled for tomorrow and not proceed to divide the house at this time.”

Opposition to a Brexit deal point to trade difficulties, problems in attracting global talent and an increased cost of living as reasons to not back the proposition of Britain divorcing itself from the EU. A continuous point of contention in getting a Brexit deal done is the Irish backstop–an arrangement to ensure that Brexit, whether a deal is struck or otherwise, would not result in a hard border between Northern Ireland and the Republic of Ireland.

“It is clear that while there is broad support for many of the key aspects of the deal, on one issue — the Northern Ireland backstop — there remains widespread and deep concern,” May told the Parliament.

The news of the resignations came as May announced earlier this year that she garnered enough Cabinet support to move forward with a Brexit deal, effectively keeping the United Kingdom within the customs union of the European Union (EU) for an indefinite amount of time. Per a CNBC report, the proposed 500-page deal  included commitments regarding UK citizens’ rights after Brexit takes place and a proposed 21-month transition period after Britain exits the EU on March 2019.