You are at:Home»Featured»UFO Travels Through Increasingly Crowded Space 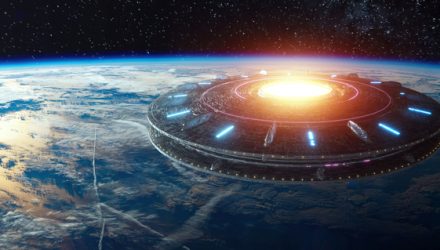 Space is getting very crowded. In addition to several CEOs (and one actor) racing up to the stars, one such billionaire business owner is being accused of overstuffing the immediate space around the planet — otherwise known as low Earth orbit — with too many satellites.

A report from the Wall Street Journal states that in less than three years, SpaceX, Elon Musk’s private space company, has launched about 1,800 satellites around the globe to build a network called Starlink, a project designed to bring high-speed internet to the world. But rivals in other countries are complaining that these satellites are endangering other spacecrafts. Musk himself has dismissed such claims, telling the Financial Times: “Space is just extremely enormous, and satellites are very tiny,” before adding: “We’ve not blocked anyone from doing anything, nor do we expect to.”

Whether Musk is right about his competitors making much ado about nothing, or his detractors are correct in accusing him of overcrowding Earth’s orbit, is not the point. What this does indicate, however, is that the space industry is filling up fast, and that this industry isn’t just about exploration. Those looking to blast off to companies engaged in space-related activities — including satellite and communication companies — could look into the Procure Space ETF (NYSE Arca: UFO), the world’s first global ETF to give investors pure-play access to the expanding space industry.

Approximately 80% of companies in the index derive the majority of their revenues directly from their involvement in the space industry, enabling investors to potentially capture this growing segment of the global economy. The Commerce Department is already throwing its support behind the American space industry with ambitious goals for regulatory reform and promotional efforts.

UFO is the first product launched by ProcureAM, a new ETP issuer founded by innovative ETF entrepreneur Andrew Chanin and ETF industry luminary and veteran Robert “Bob” Tull, who has helped build and launch over 400 ETFs.