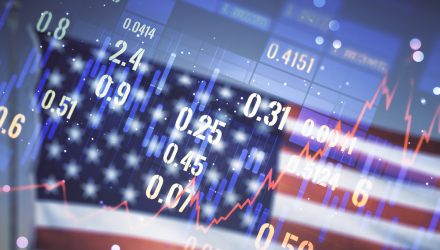 U.S. markets and stock exchange traded funds are on a hot streak, extending gains for the fourth consecutive week, after inflation came in lower than expected and fueled bets that the Fed will take a more moderate stance on its monetary policy outlook.

On Friday, the Invesco QQQ Trust (QQQ) rose 1.4%, the SPDR Dow Jones Industrial Average ETF (DIA) was up 0.8%, and the SPDR S&P 500 ETF Trust (SPY) was 1.1% higher. Additionally, DIA was testing its long-term resistance at the 200-day simple moving average.

The recent slowdown in consumer prices could allow the Fed to pull back on its previously aggressive interest rate hike stance, which would give the economy more breathing room to maintain its growth or reduce recession fears.

“Investors are eternal optimists and will focus on the good and ignore the bad,” Oanda analyst Craig Erlam told the Wall Street Journal.

Meanwhile, the better-than-expected quarterly earnings season and strong jobs numbers have all helped fuel the recent rebound in U.S. equities as well.

“The economy is not falling off a cliff, but there are some troubling signs. Still, the bulls can point to a very strong jobs market and corporate earnings that did not suggest a slowdown was hurting company profits,” Lindsey Bell, chief markets and money strategist at Ally, told Reuters.

“Stocks big and small have recovered impressively in the last two months despite a very mixed bag of economic data,” Bell added.

“The big question here is: Is it morphing into a more fundamental kind of rally?” Chaar asked the WSJ.

The rebound in U.S. equities has also helped broad benchmarks push toward long-term technical signals that could further support the momentum.

“The major indices are trading near highs going back to May and June and those highs are now serving as near-term resistance,” Adam Sarhan, chief executive of 50 Park Investments, told Reuters.