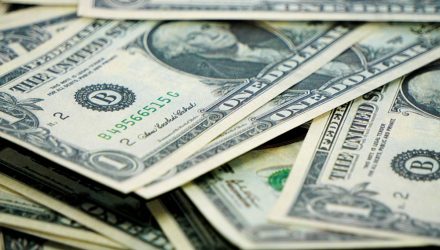 The U.S. dollar and currency-related exchange traded funds strengthened on Monday as fears of a global slowdown and speculation of interest rate hikes helped bolster the case for the greenback.

UUP tracks the price movement of the U.S. dollar against a basket of currencies, including the euro, the Japanese yen, the British pound, the Canadian dollar, the Swedish krona, and the Swiss franc. The actively managed USDU tracks the USD against a broader basket of developed and emerging market currencies including those from China, India, South Korea, Switzerland, Australia, Mexico, the United Kingdom, Canada, Japan, and Europe.

The markets are waiting on the end of the week when Federal Reserve Chair Jerome Powell will touch upon inflation and speak on the monetary policy outlook at the annual Jackson Hole, Wyoming conference.

“It’s risk being taken off the table after the market got a reality check from last week’s Fed speakers that an imminent dovish pivot is off the cards,” Michael Brown, head of market intelligence at Caxton, told Reuters.

“With investors now clearly expecting a relatively hawkish message from Fed Chair (Jerome) Powell at Jackson Hole on Friday, it’s a perfect cocktail of risk-aversion and a hawkish Fed for the greenback to bound higher, especially when growth worries, especially in Europe, continue to mount,” Brown added.

Many market observers are concerned about the potential for an economic downturn in face of aggressive monetary policy tightening. For instance, the closely watched U.S. Treasury yield curve gap between two- and 10-year Treasury notes has inverted, which has preceded previous recessions.

“The inverted yield curve is signaling a massive ‘recession’ is upon us,” Tom di Galoma, managing director at Seaport Global Holdings, said in a note. “Yield curve inversions are great predictors of recessions.”