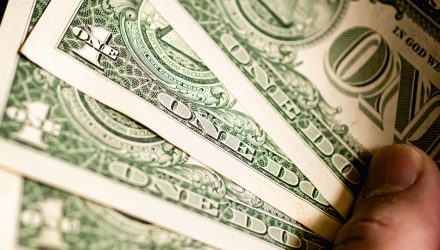 As inflation rages on to a 40-year high, the U.S. dollar and currency-related exchange traded funds stand out on increased bets of a more aggressive Federal Reserve policy outlook.

“With US rates much higher and stocks way lower, the dollar is a safe-haven trade,” Brent Donnelly, president of Spectra FX Solutions, told Bloomberg. “The only safe haven left is the U.S. dollar.”

A key gauge of the U.S. dollar advanced 0.8% Friday, moving toward its biggest gain in five weeks after the U.S. consumer price index climbed 8.6% year-over-year, its fastest pace since December 1981.

“Markets are shifting expectations toward a higher terminal rate for the Fed. That’s supportive for the US dollar and bad for risk assets,” Bipan Rai, head of foreign-exchange strategy at Canadian Imperial Bank of Commerce, told Bloomberg. “The need to take settings into restrictive territory has increased.”

The push for the greenback comes as swap contracts referencing Fed policy meeting dates traded at levels that suggested the U.S. central bank, which was projected to hike rates by half a point in June and July, could add an additional hike in September. Some were even warning of a three-quarter point increase ahead.

“The US central bank now has good reason to surprise markets by hiking more aggressively than expected in June,” Barclays economists led by Jonathan Millar wrote in a note Friday. “We realize it is a close call and that it could play out in either June or July. But we are changing our forecast to call for a 75bp hike on June 15.”