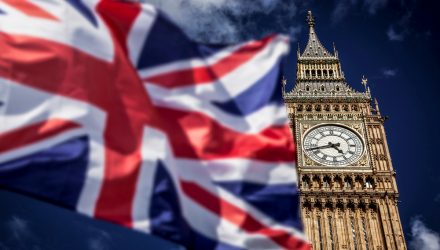 After the initial euphoria over the post-Brexit trade deal passed, the British pound currency and related exchange traded funds retreated Monday, ending a three-day winning streak, as traders considered the broader outlook for the U.K. economy.

The sterling weakened after analysts focused on questions over the terms of trade for the United Kingdom’s services industry with the EU under the new deal, Bloomberg reports. The U.K. services industry makes up about 80% of the U.K economy.

While the historic trade deal avoided a catastrophic worst-case scenario where the U.K. would break from the EU on Dec. 31 without a trade pact in place, the agreement provides little clarity for financial firms and does not include language on their market access.

“This is markets slowly but surely acknowledging that this is not an optimal deal for the U.K.,” Andreas Steno Larsen, global chief strategist at Nordea Bank Abp, told Bloomberg. “Most London-based banks didn’t exactly sound upbeat after the deal content became known, which could be a signal that the lack of agreement on financial services is an uncertainty that the pound will have to deal with through the first half of next year.”

Nevertheless, some argued that the pullback in U.K. assets was a given after a strong upward run last week.

The pound’s “weakness indeed is likely due to profit taking as well due to still high uncertainty as regards Brexit,” Thu Lan Nguyen, a foreign-exchange strategist at Commerzbank AG, told Bloomberg. “There are still open questions regarding services trade, which is quite crucial for the U.K. economy as this is where its comparative advantage lies.”