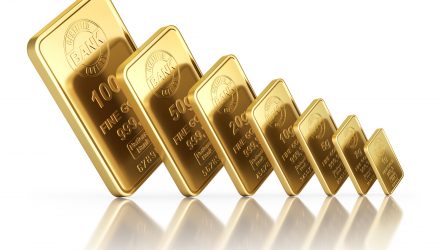 Investors love a good deal when it comes to exchange traded funds and gold ETFs are no exceptions. A pair of recently launched gold ETFs with some of the category’s lowest fees are rapidly gaining attention from investors.

The GraniteShares Gold Trust (NYSE Arca: BAR), which debuted in August 2017, and the SPDR Gold MiniShares Trust (NYSEArca: GLDM), which launched in June, both recently topped the $300 million in assets under management level.

As of the end of the third quarter, BAR had $306.54 million in assets under management. Last month, GraniteShares lowered BAR’s annual fee to 0.1749%, making it one of the least expensive gold ETFs on the market. BAR debuted with an annual expense ratio of 0.20%, or $20 on a $10,000 investment, but the upstart gold ETF is now less expensive.