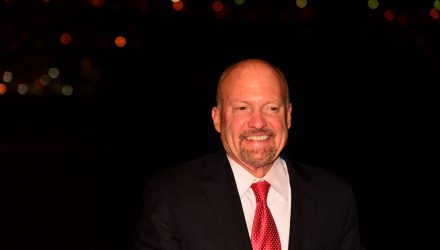 Tuttle Proposes ETFs To Bet With Or Against Jim Cramer

A subset of financial Twitter loves to hate Jim Cramer, a longtime pundit on CNBC. Now, Tuttle Capital Management wants to let them bet against him.

The longtime provider of leveraged and alternative strategies filed for the Inverse Cramer ETF (SJIM) and Long Cramer ETF (LJIM) late Wednesday. Both funds are actively managed, with the fund managers watching for stock recommendations from Cramer’s Twitter account and television appearances.

They then will take an opposite bet against those stocks in the case of SJIM, either through short positions, options or swaps. It also goes long on stocks or ETFs representing sectors Cramer is bearish on.

The short fund will aim to not hold their positions for no longer than a week, according to its prospectus, which will likely generate significant turnover. SJIM doesn’t reset daily like other inverse ETFs, which get the opposite return of the security it tracks through swaps.

A representative for CNBC did not immediately respond to a request for comment.

Both funds are equally weighted. Neither has declared expense ratios in their registration documents.

The funds could be ready for launch as soon as mid-December based on the 75-day waiting period for automatic effectiveness as prescribed in SEC’s ETF Rule.

Cramer had made some poor calls in his career, from saying Bear Stearns was “fine” days before it collapsed in the run-up to the Great Financial Crisis to more recently putting a price target of $475 per share on Coinbase. The crypto exchange peaked at the $360 per share level last November but has since plummeted to around $75 per share in the past several weeks due to reports of an SEC probe and the broader drop in appetite for growth-oriented tech stocks.

Tuttle Capital is also no stranger to issuing leveraged and inverse ETFs targeting high-profile stock pickers. Before its acquisition by AXS, Tuttle launched what is now the AXS 2x Innovation ETF (TARK) and AXS Short Innovation Daily ETF (SARK). Those funds track either twice the performance or the inverse of the ARK Innovation ETF (ARKK), the flagship fund for Cathie Wood’s disruptive technology investment thesis.

VettaFi Head of Research Todd Rosenbluth said these products would attract some immediate attention due to his pulpit among investors. However, he said the long ETF makes sense as a way to allow fans of Cramer’s to follow his investment calls without the hassle of buying individual securities.

“For the people who actually are believers in it, this is essentially a mutual fund tied to Jim Cramer, but with the benefits of an ETF, the liquidity, and the tax efficiency that comes with it,” he said.

However, he warned that these funds should not be used as core building blocks of a portfolio.