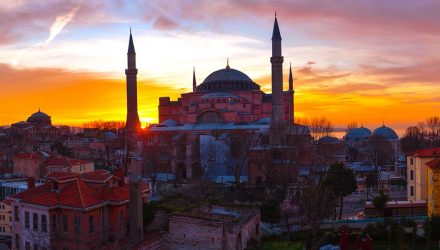 The iShares MSCI Turkey ETF (NasdaqGM: TUR) drew down as a result of the economic crisis in Turkey, losing 9.12% as of 10:50 a.m. ET. Over the past give days, TUR has lost about 25% of its value and over 30% year-to-date according to Yahoo! Finance numbers. The ETF was trading below its 50-day moving average since the middle of March, but has fallen significantly below that as of late.

Despite dominating the news, the major indexes in the U.S. were mostly unaffected until the Dow Jones Industrial Average dropped by about 50 points, while the S&P 500 gained 8 points and the Nasdaq Composite gained over 40 points. Nvdia Corp, Amazon and Mylan NV led the Nasdaq’s rally with all three gaining about 2%.