You are at:Home»Equity ETFs»Turkish Crisis Could Give Way to EM Opportunity 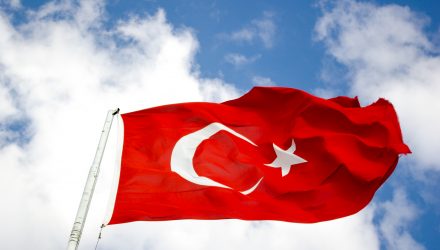 Turkish Crisis Could Give Way to EM Opportunity

The widely followed MSCI Emerging Markets Index tumbled again Monday amid ongoing turmoil in Turkey. The Turkish lira hit another record low against the dollar. In an effort to prop up the currency, the Turkish central bank lowered the reserve requirement for banks by 250 basis points.

“The emerging markets-tracking EEM ETF is showing signs of recovery amid international trade war turmoil, and there are several reasons to own the space. To be sure, the EEM is down on the year, but it’s managed to bounce nicely off its June lows,” reports CNBC.

EEM and VWO differ in that the former features exposure to South Korea while the latter does not. EEM tracks an MSCI index while VWO tracks a FTSE index. MSCI classifies South Korea, Asia’s fourth-largest economy as an emerging market while FTSE does not.

The recently resurgent U.S. dollar could be one reason why investors are retreating from emerging markets equities. A stronger dollar raises external financing costs for developing economies and usually leads to lower commodities prices, a relevant point because many developing commodities are major commodities exporters.

“Analysts expect earnings growth in emerging markets to rebound in 2019, despite recent softness from the global trade slowdown. Rising oil prices should benefit emerging markets, too,” according to CNBC.