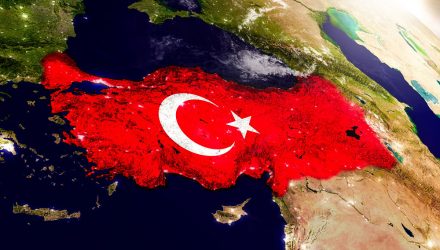 The iShares MSCI Turkey ETF (NASDAQ: TUR) is up more than 35% year-to-date, good for one of the best performances among emerging markets single-country exchange traded funds. In theory, TUR’s 2017 performance should be chastening those bearish on Turkish stocks.

On the other hand, some market observers believe Turkish equities are primed to retreat. Turkey accounts for barely more than 1% of the widely followed MSCI Emerging Markets Index, making TUR the desired avenue for investors looking to access Turkey’s equity markets.

With Monday’s slide, TUR is off nearly 9% over just the past week.

“The reversal implies NN Investment Partners, which has been underweight on Turkey this year, and Hermes Investment Management, which shunned the market altogether, can at last see their bearish strategy beginning to work,” reports Bloomberg. “The Hague-based NN Investment Partners is shorting Turkish equities in the funds it has the mandate to do so and may increase its underweight position in others.”