You are at:Home»Equity ETFs»Turkey ETF Still Has a Lot of Work to Do 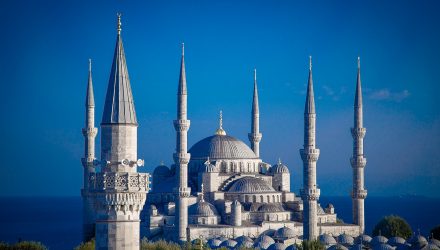 Turkey ETF Still Has a Lot of Work to Do

“It is important to note that this interest rate increase is only a bare minimum, first step to exit the current crisis. There is a high probability that the lira will once again begin to depreciate rapidly after only a temporary rally, potentially forcing the Bank to raise interest rates even further at later policy meetings,” according to Markit.

At the very least, Turkey’s central bank must keep rates high over the near-term and perhaps unveil additional rate hikes to further stabilize the lira.

“To rebuild financial-market stability, the Bank must, at a minimum, maintain these high interest rates for more than a month or two, while also taking other actions to maintain defensive monetary policy,” according to Markit. “Although President Erdoğan will continue to decry high interest rates, it will be important that he limits his opposition to rhetoric. Should these actions, or the resulting negative impact on domestic demand growth, trigger a more tangible push to find a scape goat by Erdoğan – perhaps an attempt to push out TCMB Governor Murat Çetinkaya or members of the Monetary Policy Committee or to impose penalties on the governor or the committee members – another currency crisis could develop as confidence in institutional integrity is once again undermined.”