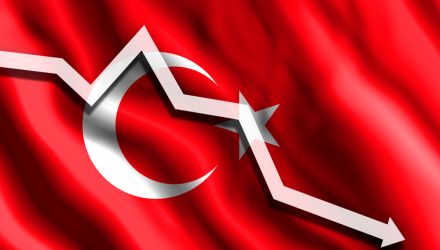 Turkey country-specific exchange traded fund retreated Tuesday as weakness in the lira currency and friction with the European Union weighed.

The lira’s depreciation comes even after Turkey’s state banks aggressively sold off dollars to help prop up the local currency, further weighing on foreign exchange reserves.

“I think it was just ongoing lira selling and for some reason, someone at state-owned banks stepped back creating a temporary FX shortage. That has exacerbated ongoing strains in the FX market,” Timothy Ash, senior emerging markets strategist at Bluebay Asset Management, told CNBC. “Given the level of state bank intervention on a regular basis, it is hard to say the TRY is a floating currency or that the CBRT really targets inflation,” Ash continued, referring to Turkey’s central bank. “The lira is now a heavily managed exchange rate.”

Further adding to pressures on Turkish assets, Turkey’s relationship with the EU is growing strained after EU officials warned of sanctions on Turkey for its attempts to drill for oil and gas in the eastern Mediterranean, or areas contested with Greece.

The currency moves also reveal ongoing uncertainty and the trend toward safe assets, according to Agathe Demarais, Global Forecasting Director at the Economist Intelligence Unit.

“I think that the latest lira selling illustrates investors’ flight towards safe havens — while the lira was taking a hit, gold was climbing to record-highs,” Demarais told CNBC. “The selling also highlights the lack of confidence of investors in the ability of the Turkish economy to recover swiftly from the pandemic,” she added, “coupled with deep negative real interest rates, wide fiscal and current-account deficits, and persistently strong credit expansion.”