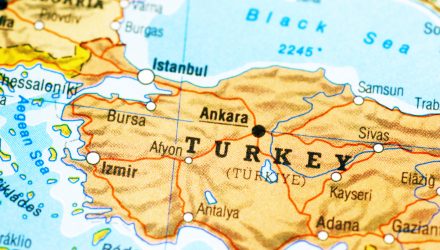 Prime Minister Binali Yildirim, whose post will be abolished when President Recep Tayyip Erdogan is sworn in under a powerful new system, said the next government will “take measures” on both rates and inflation, reports Laura Pitel for the Financial Times.

“Lowering interest rates and lowering inflation will be at the top of our priorities,” Yildirim told the state-run Anadolu news agency.

Consumer inflation in Turkey hit a 14-year high of 15.4% in June, which has pushed for calls for a fresh round of interest rate hikes at the next central bank meeting on July 24. Market observers are concerned that Erdogan, whom is a vocal critic of higher rates, will not allow the central bank to hike rates in a timely manner. The president argued that higher rates cause rather than curb inflation.

Related: Second Round of Tariffs Could Affect Agribusiness ETF