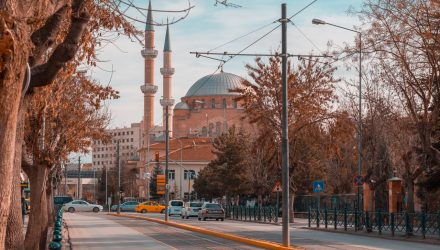 The Turkey ETF climbed Thursday after the Turkish government revealed strong economic growth, with Goldman Sachs projecting the strength to be maintained through the rest of the year.

“Pro-business and reform-oriented policies have been a key driver of economic growth in Turkey and the government is committed to continue these policies,” Arda Ermut, president of the official Investment Support and Promotion Agency of Turkey, said in a statement.

Turkey’s economy has been recouping after a slump that followed the failed military coup in July 2016 to become one of the fastest-expanding economies among G-20 nations.

Why Turkey Growth Will Continue

“Households were the biggest contributor and going forward, consumption growth will remain solid in 2018” assuming no increase in financial volatility or the recent slump in the lira becoming prolonged, Yetkin told Bloomberg, projecting household spending to be near the government’s 5.5% growth target this year.