You are at:Home»Featured»Turkey ETF Can’t Catch a Break 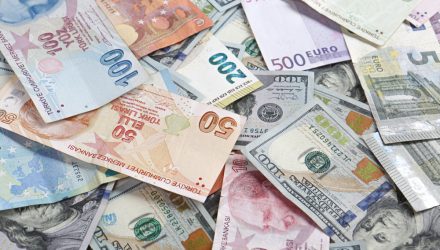 A Turkey country-specific exchange traded fund retreated on Wednesday as the lira continued to tumble despite the government’s attempts to stabilize the currency.

The lira depreciated more than 6% against the U.S. dollar, erasing part of the currency’s rebound since last week, after Turkey’s government guaranteed returns on certain lira bank deposit accounts at a rate similar to those on foreign currency in a bid to support the local currency, the Wall Street Journal reports. The plan was implemented to try and support a precipitous plunge in the lira currency this year.

Some analysts initially believed that the program, which encourages savers to keep money in the Turkish lira, would fuel an increase in deposits. President Recep Tayyip Erdogan stated that lira deposits rose by 23.8 billion lira, or about $2 billion, after the announcement.

Economists also believed that the government also may have intervened heavily in foreign exchange markets by purchasing lira to support the currency.

“The narrative on what drove the rapid appreciation last week has changed now toward foreign-currency intervention rather than increased lira deposits,” Erik Meyersson, a senior economist at Swedish bank Handelsbanken, told the WSJ.

However, high inflation will be the core hurdle to getting Turkish citizens to hold the lira again. Turks have sought to convert to dollars, euros, and gold instead of the lira.

“Today we’re seeing the lira depreciate again, and I don’t see any real arguments to why the lira should stabilize,” Meyersson added.

Turkey’s central bank stated on Wednesday that it would target 5% inflation and allow the exchange rate to be determined by market fundamentals or supply and demand. Meanwhile, investors and economists warned that they have lost confidence in the central bank’s ability, partially due to political pressure.