You are at:Home»Alternative ETFs»Turkey Crisis Evokes Risk-Off Sentiment for Investors 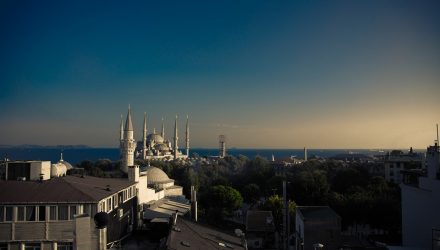 At a time when the major indexes in the United States capital markets are nearing record levels, Turkey’s economic crisis and its contagion returned with the Dow Jones Industrial Average dropping over 200 points. The turkey contagion continues to infect the markets, evoking a risk-off sentiment for investors domestically and internationally.

With Turkey caught in the middle of an economic hurricane, Turkish bonds have rocketed past the 20% yield level. Despite pressure from economic advisors, Turkish President Recep Tayyip Erdogan prefers to keep low as possible, saying “interest rates should be kept to a minimum because they are a tool of exploitation that makes the poor poorer and the rich richer.”

Today’s drawdown in the U.S. markets came as a result of the Turkish delegation leaving Washington without gaining any traction regarding the detention of U.S. pastor Andrew Brunson, which increased the chances for U.S. sanctions. As far as resolving Turkey’s ongoing issues, it will take more than just an interest rate hike, according to various market experts.

“J.P. Morgan’s macro team believes that a policy response would need to consist of the following components: policy rate hikes between (5 percent and 10 percent), fiscal commitment to backstop and recapitalize banks and deal with problem loans, targeted fiscal support for the most distressed sectors – a general policy framework which acknowledges the need for deleveraging and recognizes a recession is a natural side-product of this process,” said Pedro Martins, a strategist at J.P. Morgan.

Despite recovering earlier losses, the lira hit all-time lows against the U.S. dollar as the crisis unfolded. To help remediate the currency crisis, the Turkish central bank lowered the reserve requirement for banks by 250 basis points to improve liquidity conditions.

Furthermore, U.S. President Donald Trump announced that he would double tariffs on steel and aluminum, which further hampered the Turkish lira. Things got dire when President Erdogan asked citizens to convert their dollars and other foreign currencies, including safe-haven assets like gold to Turkish lira.