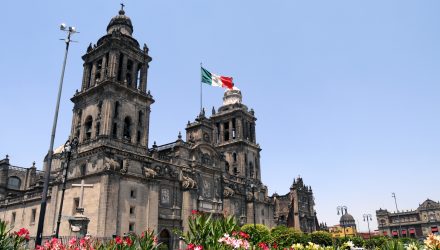 Stocks in Mexico, Latin America’s second-largest economy, are struggling. The iShares MSCI Mexico Capped ETF (NYSEArca: EWW), the largest exchange traded fund dedicated to Mexican equities, is lower by more than 8% this year compared to a year-to-date loss of less than 1% for the MSCI Emerging Markets Index.

Rising political volatility ahead of Mexico’s national election next month and lingering concerns about the fate of the North American Free Trade Agreement (NAFTA) are among the factors hindering EWW and Mexican stocks.

“Presidential candidate Andrés Manuel López Obrador, a leftist nationalist known as AMLO, is leading polls ahead of the July vote,” reports Gerrard Cowan for the Wall Street Journal. “His election could further spook investors, depending on the economic policy he implements and the impact of his election on already strained relations with the U.S., says Neena Mishra, director of ETF research at Zacks Investment Research.”