You are at:Home»Featured»Trump vs. Obama: The Most Jobs Created in First 20 Months 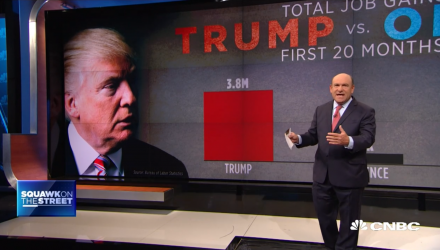 Trump vs. Obama: The Most Jobs Created in First 20 Months

The U.S. has seen a record-breaking pace of job creation. According to ADP data, 219,000 jobs were added in July, the 94th straight month of job growth. Unemployment rate also broke below the 4 percent barrier, coming in at 3.9 percent in July, according to the Bureau of Labor Statistics.

Although the trade tensions between China and the United States are still in effect, they continue to have little to no impact upon U.S. markets and job growth, with the Dow, S&P 500, and Nasdaq up 3.3 percent, 5.5 percent, and 21.4 percent YTD, respectively. The S&P 500 index is just 0.4 percent below its record close of $2,872.87 hit on January 26.

Steve Liesman of CNBC broke down the sectors which have seen the most and least job gains under the Trump administration, with comparison to that of Obama’s. In President Trump’s first 20 months in office, the U.S. has seen 3.8 million jobs added, a 482,000 difference to Obama’s 4.3 million jobs added in the same time frame.