You are at:Home»Equity ETFs»Trump Ramps Up Trade War Rhetoric with China 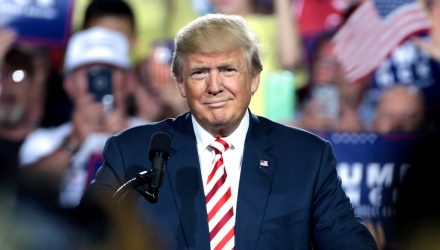 U.S. President Donald Trump ramped up the trade war rhetoric, saying that he’s willing to impose additional tariffs on every Chinese good imported to the U.S. if the situation warrants it.

China, the European Union and others have been manipulating their currencies and interest rates lower, while the U.S. is raising rates while the dollars gets stronger and stronger with each passing day – taking away our big competitive edge. As usual, not a level playing field…

It’s the latest salvo fired by Trump after the U.S. has already imposed tariffs on $34 billion of Chinese goods with China countering with their own retaliatory tariffs.

“I’m not doing this for politics, I’m doing this to do the right thing for our country,” said Trump. “We have been ripped off by China for a long time.”