You are at:Home»Investing»Treasury Yields Fall on Meek Inflation Data 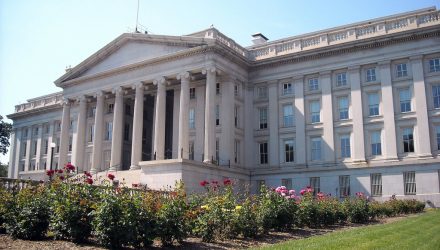 U.S. government debt yields fell today on meek inflation data as the U.S. Labor Department revealed that its U.S. producer price index was unchanged in July, falling short of the 0.2% increase expected by a Reuters poll of economists. The yield on the benchmark 10-year Treasury note fell to 2.937 while the 30-year note went down to 3.074 as of 3:15 p.m. ET.

The Labor Department data also showed that In the 12 months through July, the core PPI increased by 2.8%, which follows a 2.7% increase in June. The tame PPI follows data that showed signs of a robust economy, especially with the Commerce Department announcing a 4.1% increase in GDP during the second quarter.

“Both the headline and core indexes were constrained by a 0.8% drop in the volatile ‘trade services’ component, which measures profit margins for retailers and wholesalers. This is a correction, following a run of big increases; it likely does not mark the start of a sustained run of smaller core PPI numbers,” said Ian Shepherdson, chief economist at Pantheon Macroeconomics.

While Treasury yields dipped, corporate bond-focused fixed-income ETFs like the iShares Intermediate Credit Bond ETF (NASDAQ: CIU) gained. CIU was up 0.16% in today’s trading session and up 0.38% the past month.