You are at:Home»Fixed-Income»Treasury Bond ETFs Weakening on Foreign Demand Concerns 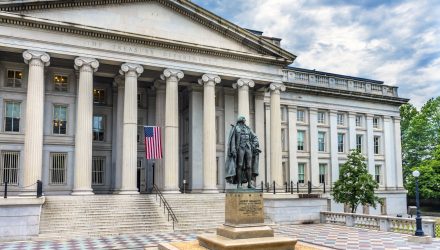 For instance, the Bank of Japan said Tuesday it would scale back its monthly bond purchases of 10-to-25 year debt by ¥10bn to ¥190bn, which was the first reduction in the sector since December 2016, the Financial Times reports.

“Generally speaking, reductions are not a huge shock as it seems pretty clear that the adoption of yield curve control from September 2016 was done with an aim of slowly reducing purchases,” Steve Barrow, head of G10 research at Standard Bank, told FT. “However, in light of the fact that BoJ governor [Haruhiko] Kuroda has spoken a lot recently about the difficulties for the financial sector from the prolonged period of low rates, there has been some speculation that the BoJ is moving slowly towards tighter policy. Some have even speculated that this could mean higher rates as soon as this year, at least in terms of the 0 per cent 10-year target, if not the minus 0.1 per cent target for short rates.”

Meanwhile, on the supply side, the U.S. government is expected to increase sales of Treasuries, which may further dampen prices. The U.S. Treasury Department maintained longer-term debt sales for the seventh quarter at $62 billion and anticipates an increase in coupon-bearing securities n February to meet funding needs, according to Bloomberg.