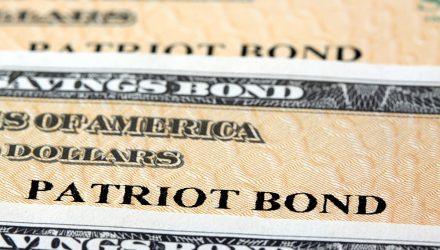 U.S. Treasury bond exchange traded funds are retreating, with long-term Treasury yields at their highest level in over a month, as investors dumped government bonds ahead of a massive debt auction this week.

Meanwhile, yields on benchmark 10-year Treasury notes rose to 0.655%, compared to 0.535% on August 6, and yields on 30-year notes was up to 1.35%, it’s highest level since early July. Yields and bond prices have an inverse relationship, so rising yields correspond with falling prices.

The sudden spike has been a quick turnaround in the Treasury market after yields on benchmark 10-year notes were stuck near record lows just last week. The depressed yields suggest ongoing market uncertainty and elevated demand for safety bets, despite a sharp rally in U.S. equities off the March lows.

Market observers argued that the recent climb in government yields is a result of bond dealers paring back holdings and fund managers making room in portfolios ahead of a wave of new bond issuance, the Wall Street Journal reports. The thinner trading volumes during the traditional August summer hiatus may have also contributed to the wider swings.

The U.S. will raise high levels of debt from its weekly note an bond sales to support spending programs. On Wednesday, the government will auction $38 billion in 10-year bonds, followed by $26 billion in 30-year debt on Thursday. Along with $48 billion of three-year notes sold Tuesday, the week’s total will be $112 billion.

Treasury yields are “clearly at a more interesting level now,” Laurent Crosnier, chief investment officer at Amundi, told the WSJ. “Valuations were very stretched, the market was pricing in too much bad news without taking into account the supply that was coming.”