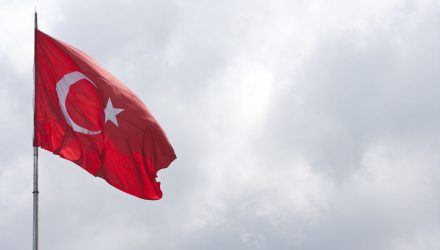 The iShares MSCI Turkey ETF (NASDAQ: TUR) plunged on heavy volume Monday amid ongoing diplomatic tensions between Turkey and the U.S. Some traders are wagering on more declines for TUR, the only exchange traded fund dedicated to Turkish stocks.

Last week, Turkish officials arrested a Turkish employee of the U.S. consulate in Istanbul alleging that the staffer has ties to Muslim cleric Fethullah Gulen. Gulen is blamed by the current government for a failed coup attempt last year.

“The U.S. embassy in Ankara condemned those charges as baseless and announced on Sunday night it was halting all non-immigrant visa services in Turkey while it reassessed Turkey’s commitment to the security of its missions and staff,” according to Reuters.

Turkish officials quickly responded with a similar move of their own.