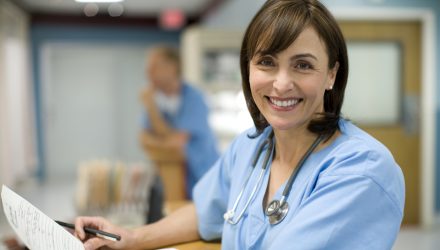 Traders Prep For a Pullback in a Big Healthcare ETF

The Health Care Select Sector SPDR (NYSEArca: XLV), the largest healthcare exchange traded fund by assets, and rival healthcare ETFs have spent much of 2018 in rally mode, but that is not stopping some traders from betting on a near-term pullback for the high-flying sector.

XLV allocates about two-thirds of its combined weight to pharmaceuticals and biotechnology stocks. There are other catalysts to consider, including that the U.S. economy is moving into the late-cycle phase, overall growth may slow and signs of an economic slowdown could pop up. Consequently, investors may also turn to defensive sectors that are less economically sensitive, such as healthcare.

On Thursday, XLV “fell into the red at the open, last seen trading down 1.4% at $93.97. XLV options traders have taken note, too, with nearly 31,000 puts on the tape — five times what’s typically seen and volume pacing in the 99th annual percentile,” according to Schaeffer’s Investment Research.

A Deeper Look At The Action

“Most active are the November 88 and 94 puts, and data from the International Securities Exchange (ISE) confirms 7,000 lower-strike options were sold to open for $0.28 each, while the same number of higher-strike ones were bought to open for $1.15 apiece. In other words, it looks like a long put spread was initiated for an initial cash outlay of $609,000 (number of contracts * $0.87 debit paid per pair * 100 shares per contract),” according to Schaeffer’s.

Other data points suggest some investors are preparing for XLV to pullback. For the week ended Oct. 4, XLV saw outflows of $431.38 million, a total surpassed by just seven other ETFs.