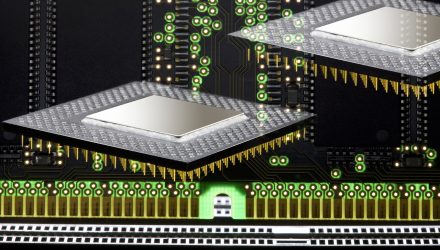 Traders Get Defensive With a Chip ETF

A major earnings beat for Advanced Micro Devices (AMD) sent semiconductor stocks and exchange traded funds rallying Thursday, but some traders used the opportunity to put on some defensive positioning with one well-known chip fund.

“Around 97,000 calls and 26,000 puts have changed hands on SMH so far — nearly three times what’s typically seen, and volume pacing in the 98th annual percentile. The bulk of the activity has centered at the September 90 and 100 puts, where matching blocks of 19,100 contracts changed hands around the same time earlier,” according to Schaeffer’s Investment Research.

“This bearish positioning by options traders just echoes a growing trend. At the International Securities Exchange (ISE), Chicago Board Options Exchange (CBOE), and NASDAQ OMX PHLX (PHLX), the exchange-traded fund’s (ETF) 10-day put/call volume ratio of 6.37 ranks in the 78th annual percentile, meaning puts have been bought to open over calls at a quicker-than-usual clip,” according to Schaeffer’s.