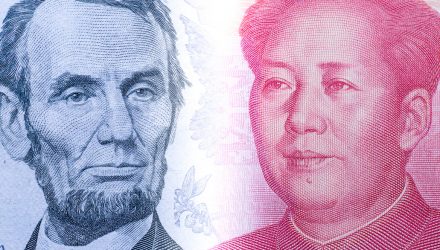 With the latest movements in the capital markets serving as a reminder to investors that volatility is not to be forgotten, it’s important to look outside of the United States for opportunities, such as China.

“There are a lot of options, especially since ETFs have become more creative,” said ETF Trends CEO Tom Lydon, referencing the evolution of the investment vehicle to Stuart Varney during an episode on “Varney & Co.” on the Fox Business Network.

ASHR: A Touch of Authenticity

“Many of them are state-owned,” explained Lydon. “You can’t always trust China–we know that in the marketplace.”

Lydon alludes to ongoing trade negotiations between the U.S. and China, which have revolved around a wide range of issues, such as forced technology transfer as both are working feverishly to bring the trade war to an end. U.S. President Donald Trump has already imposed tariffs to the tune of $250 billion of Chinese imports in 2018.

“They’ve been working at it (trade deal) for a while,” said Lydon. “The teeth of the negotiations will be intellectual property, cybersecurity and cloud computing.”

“However, there are a lot of companies on mainland China that just recently, because Chinese laws have loosened up, that have allowed investors outside of the U.S. to invest in Chinese stocks,” Lydon added.

As such, one ETF to consider is the Xtrackers Harvest CSI 300 China A ETF (NYSEArca: ASHR) as a way for investors to gain exposure to China’s biggest, best and most authentic equities.

“This is the best way to actually get into China and invest in real companies that are not state-owned,” said Lydon.

A recent MSCI Inc. press release said the index provider would increase the weight of China A shares by upping the inclusion factor from 5 percent to 20 percent.

“The MSCI, which is the mothership of all indexes around the world just started allowing Chinese stocks in their major indexes, but just to a small degree,” Lydon said. “If you want to get right to the heart of China as far as to what’s going on specifically, if you feel that a trade deal is coming, ASHR is the best way to go.”

The Value-Oriented China Play in A-Shares

Furthermore, strength in U.S. equities thus far in 2019 is translating to strength abroad as emerging markets after a 2018 to forget. The EM space is banking on a possible trade deal between the United States and China as the main trigger event that could send China soaring.

In 2018, the majority of investors might have been driven away by the sea of red prices in emerging markets, but savvy investors who were quick to see the EM space as one with substantial markdowns. In addition, a more dovish Fed with less rate hike expectations could provide even more fuel for China to strengthen with a weaker dollar.

“There are plenty of choices in the China area and valuations are very favorable compared to the U.S. right now,” Lydon said.