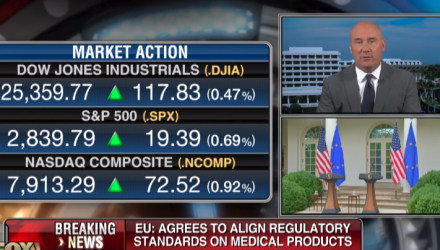 For lead-footed investors naturally inclined to step on the investment accelerator when they see green, the technology sector has been the ideal expressway to profits. For investors looking to allocate capital in tech and dip into emerging markets, the Emerging Markets Internet & Ecommerce ETF (NYSEArca: EMQQ) provides the perfect amalgamation of the two sectors.

“You can not only pick up the Ubers of the US, but you can have the Ubers of areas like India or the Amazons of Brazil,” said Lydon.

During the course of today’s trading session, Facebook shares were up (almost 3.5%) prior to reporting their second-quarter earnings report with analysts expecting another solid quarter despite a massive data-harvesting scandal.

“There are high expectations following Google’s strongdigital ad revenue,” said Tigress Financial Partners CIO Ivan Feinseth. “I think the whole focus is going to be on the growth of Instagram. Instagram has the potential to be as big as Facebook itself.”