You are at:Home»Alternative ETFs»Tom Lydon on Fox: Investors Should Look to Emerging Markets, Small Caps 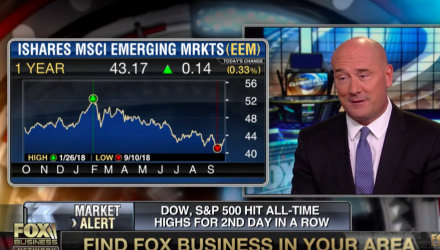 The U.S. stock market has been the default play for investors even as the bull market enters into the latter stages of its market cycle, but when the well runs dry, it could be emerging markets and small capitalization opportunities receiving the lion’s share of investor capital.

“It’s all been about trade wars,” said ETF Trends Publisher Tom Lydon said during “Countdown to the Closing Bell” on Fox Business Network on Friday. “All this conversation continues to pound emerging markets.”

While the majority of investors might be driven away by the red prices in emerging markets, they should be looked at as being substantial markdowns, espcially if trade negotiations between the U.S. and China result into something materially positive.

“If we do see some positive talks–even if it’s just a little discussion, they’ll pop up two or three percent in a given day so the idea here is look at valuations,” added Lydon. “Emerging markets in some areas have P/Es (price-to-earnings ratios) of nine compared to 18 for the S&P, so you can buy those stocks half off and through ETFs, there’s a great opportunity to do it.”

With respect to value compared to price, many of these ETFs from abroad present a profitable opportunity that can be realized, especially if China and the U.S. ameliorate their trade differences. It presents an interesting opportunity for the investor who is seeking value in terms of locating discounted assets.