You are at:Home»Alternative ETFs»Tom Lydon on Fox: Emerging Markets Investors Unfazed by Volatility 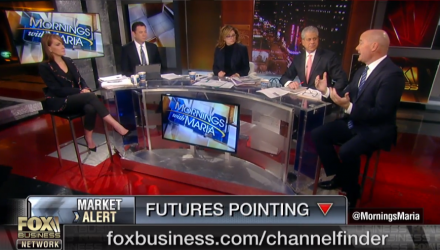 The capital markets got a reprieve from the ongoing trade wars between the United States and China as U.S. President Donald Trump and Chinese president Xi Jinping agreed to cease fire on their tariff-for-tariff battle last week. As part of the agreement, both nations agreed to withhold imposing further tariffs on each other for 90 days while they work out a firm, ironclad deal to start 2019.

However, volatility crept back into U.S. equities as the reality of a permanent trade agreement was still open for discussion with contentious topics like forced technology transfer and intellectual property possibly derailing negotiations. Things got worse when news broke that Meng Wanzhou, the CFO of Huawei, one of the world’s largest mobile phone makers, was arrested in Canada and faces extradition to the US, which could also squelch a permanent trade deal.

“Around the world, we’ve got a lot of concern,” Lydon said during Fox Business Network’s “Mornings with Maria” on Monday. “However, there’s something that’s peeking its head out, which is emerging markets. We’re starting to see a lot of money move into emerging markets ETFs, which I think are investors looking for value.”

While the majority of investors might be driven away by the red prices in emerging markets during much of 2018, Lydon believes they should be looked at as substantial markdowns, especially if trade negotiations between the U.S. and China result into something materially positive–a result emerging markets bettors are hoping for. From a fundamental standpoint, low price-to-earnings ratios in emerging markets ETFs have made them prime value plays as capital inflows continue.