You are at:Home»Investing»Tom Lydon on Fox: The Cure for Volatility Sickness via Emerging Markets ETFs 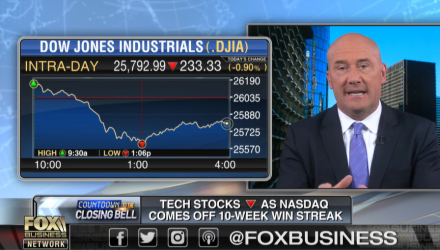 Tom Lydon on Fox: The Cure for Volatility Sickness via Emerging Markets ETFs

U.S. equities began the week with a bout volatility not seen in the capital markets since the fourth quarter of 2018 as the Dow Jones Industrial Average fell as much 400 points during Monday’s trading session before settling for a 200-point loss at the close. It’s the type of market movements that could induce motion sickness to any investor, according to ETF Trends CEO Tom Lydon.

“I think we’ve all finished our allocation of Dramamine for sure,” said Lydon.

A Dose of Emerging Markets

However, Lydon also suggested investors include more emerging markets ETFs as part of their dosage to protect from future volatility–one such area is emerging markets. The EM space has had its fair share of struggles in years past, but for investors who are still hesitant when it comes to international market exposure, now is the time with a possible trade deal between the United States and China looming as the primary trigger event.

While the majority of investors might have been driven away by the red prices in emerging markets during much of 2018, Lydon believes they should be looked at as substantial markdowns, especially if trade negotiations between the U.S. and China result into something materially positive. From a fundamental standpoint, low price-to-earnings ratios in emerging markets ETFs have made them prime value plays as capital inflows continue.

As such, investors have been quick to note the opportunity as international and emerging markets combined have netted $12.8 billion when looking at the top ten year-to-date inflows. Leading the pack is the iShares Core MSCI Emerging Markets ETF (NYSEArca: IEMG) with $4.8 billion in YTD inflows.

IEMG tracks the investment results of the MSCI Emerging Markets Investable Market Index, which is designed to measure large-, mid- and small-cap equity market performance in the global emerging markets. The fund provides this broad-based exposure to the EM space at a paltry 0.14 percent expense ratio.

“Compared to mutual funds and actively-managed strategies, you’ve got diversification across so many different markets,” said Lydon.