You are at:Home»Featured»Tom Lydon on CNBC’s “ETF Edge”: The Two Faces of Retail 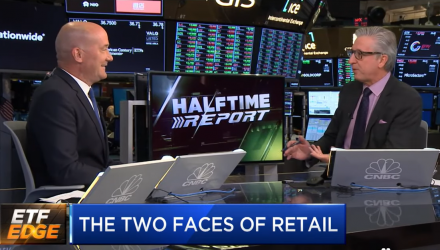 After a volatile December that saw U.S. equities finish their worst year in over a decade, the retail sector was banking on a strong holiday shopping season to shake its own market doldrums. With the ongoing government shutdown delaying retail figures from the Commerce Department, retail investors are left to wonder whether a market cap-weighted strategy or an equal weight strategy will serve them best moving forward.

On one hand, RTH makes its case for a market-cap weighted strategy with its emphasis on concentrated holdings of 19 percent in Amazon, 11 percent in Home Depot and 10 percent in Walmart to round off its top three positions. Of course, with Amazon being one of the prime growth-fueled stocks during an extended bull run that saw it reach $1 trillion in market value, RTH was able to eke out a 3.63 percent return in 2018 despite the year-end volatility.

However, Lydon mentioned that the market-cap weighting strategy of RTH isn’t a miracle elixir that cures all ills in a retail industry that got hit recently as a result of slower growth from the likes of Macy’s and Kohl’s.

“Market cap weighting doesn’t always work in your advantage the way it did here,” said Lydon.

With its heavy emphasis on Amazon, which experienced deep declines during a tumultuous December, RTH fell below its 200-day moving average.

“You live and die by the sword,” said Lydon.