You are at:Home»Video»Tom Lydon on CNBC’s “ETF Edge”: Banks, Disruption, Myths, and a Model Portfolio 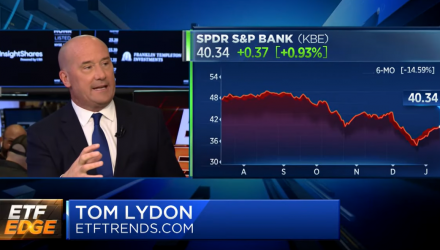 With exchange-traded funds (ETFs) garnering over $300 billion in assets in 2018 despite a volatile end to the year, it’s clear that there’s an appetite for the ETF as an investment vehicle that’s expected to continue in 2019 and beyond. However, with over 2,000 exchange-traded products (ETPs) in the marketplace, where does an investor start?

Should Investors Deposit into Banking ETFs?

Citigroup kicked off earnings season with banks like Wells Fargo, Bank of America and JP Morgan Chase scheduled to report later this week for the financial sector, but market mavens are mixed on what to expect, warranting caution for investors.

Citigroup was first on the docket, reporting $1.61 in profit per share, besting Wall Street expectations, but losing 21 percent in its fixed-income trading division. However, with rates rising four times in 2018, the company was able to experience growth in its pure banking business, such as corporate lending.

“It’s not as though lending and credit card business was bad,” said Lydon.

However, investors looking to play the Financial Select Sector SPDR (NYSEArca: XLF) have to be wary of the dichotomy that exists between its market cap-weighted strategy and an equal weight strategy of an ETF like the SPDR KBW Bank ETF (NYSEArca: KBE).

XLF lost 13 percent in 2018 with its concentrated holdings in Berkshire Hathaway and JP Morgan Chase.

“Investors and advisors are lifting up the hood and they’re smelling the beta,” said Lydon. “They’re finding out, in fact, what’s inside that index.”

On the other hand, KBE lost 19.62 percent with its more diversified holdings of banks with varying sizes. Despite its performance in comparison to XLF, in essence, it gives investors a pure banking play in the ETF space.

“If you remove all of that and look at the pure banking aspect of it and you look at KBE, these are small, mid-sized banks, well-diversified, equal weight portfolio and as interest rates continue to rise, this is the bread and butter of the banking industry,” Lydon added.

As an alternative to a pure banking play, investors should consider financial technology as growth in the industry continues and more consumers look to online banking to serve their finance needs. Once such ETF to consider is the ETFMG Prime Mobile Payments ETF (NYSEArca: IPAY).

Portfolios Should Be More Disruptive

Whether society wants it or not, robotics, artificial intelligence (AI), machine learning, or any other type of disruptive technology is the next wave of innovation. For investors who missed out on the serendipitous run of FAANG (Facebook, Amazon, Apple, Netflix, Google) stocks, they can look to capitalize on disruptive tech options in 2019.

“It’s something you need to consider as opposed to your grandfather’s technology,” said Lydon.

To take advantage of this transformative movement, Lydon suggests investors look at the ARK Innovation Fund (NYSEArca: ARKK). ARKK’s focus is primarily on domestic and foreign equity securities of companies that coincide with the ETF’s investment theme of disruptive innovation–a technology or strategy that disrupts the status quo and develops its own niche market. ARKK invests in both developed and emerging markets with the intent to use American Depositary Receipts (ADRs)–securities offered in the U.S., but are offered as a specified number of shares in a foreign corporation.