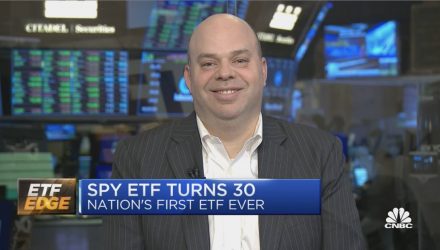 Todd Rosenbluth appeared on CNBC’s ETF Edge with Bob Pisani and State Street’s Rory Tobin to discuss the 30th anniversary of the grandfather of all U.S.-based ETFs, the SPDR S&P 500 ETF Trust (SPY).

SPY is the largest, most actively traded ETF in the world, with $370 billion in assets and an eye-popping $32 billion in daily trading volume. SPY is notable for its popularity among both active traders and buy-and-hold investors.” I think SPY has become so popular because of its liquidity,” Tobin said, noting that SPY allows easy access in and out of the S&P 500 for traders. “SPY really gives people a very strong value proposition.”

Rosenbluth noted that SPY has competitors that offer similar exposure at lower basis point costs, including the iShares S&P 500 ETF (IVV), the Vanguard S&P 500 ETF (VOO), and even fellow State Street Fund the SPDR Portfolio S&P 500 ETF (SPLG). SPY has seen outflows as a result, losing market share to these competitors. “SPY came out for institutions,” Rosenbluth observed, adding that the savings exhibited by the fees of the competitors do add up for people holding on for the long term. Tobin concurred, noting the SPLG is meant more for retail investors while SPY remains a sub-10 basis point fund.

Discussing the growing inflows into ETFs as the gap narrows between them and mutual funds, Rosenbluth indicated that he believed ETFs would ultimately close that gap. “It’s going to happen in both our lifetimes,” he said, though the timing remains uncertain. The ETF’s advantages, including its ability to be traded intraday, the lack of minimum purchase requirements, and more tax efficiency have helped make it the wrapper of choice for investors. “If you were a buy-and-hold investor in a mutual fund, you not only lost money in 2022 but you likely had to pay a capital gains tax as a result of it. If you owned SPY or any of its competitors that are only 3 basis points, you didn’t have to do that at all.”

An additional driver of money moving away from mutual funds and into ETFs is not only conversions, which will continue to happen, but asset managers launching ETF versions of their mutual funds. “That’s a good thing for investors, they are going to pay a lot less,” Rosenbluth said, continuing, “the investor wins as a result of SPY coming to market 30 years ago.”