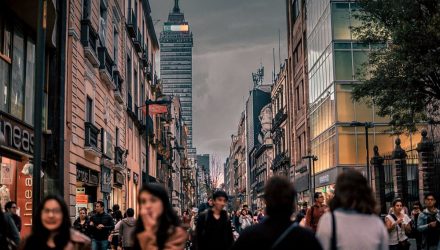 Time Could be Right For Mexico ETF

The iShares MSCI Mexico Capped ETF (NYSEArca: EWW), the largest ETF dedicated to Mexican equities, is up nearly 5% this year and more gains could be on the way for benchmark Mexico ETF if seasonal patterns hold true to form.

EWW “has endured a rockier year than most other funds, amid concerns that President Trump will pull out of NAFTA. After topping out at a two-year high of $57.82 in late August, EWW staged a retreat, ultimately finding support in the $48 area — a 61.8% Fibonacci retracement of the fund’s 2017 low to high,” according to Schaeffer’s Investment Research.

EWW allocates almost a quarter of its weight to consumer staples with telecom and financial services names combining for nearly a third of the ETF’s weight. Historical data indicate the time is right to consider EWW.

“Although uncertainty about NAFTA is still in the air, it’s worth noting that the Mexico-centered ETF tends to rally in a big way in March. The fund has averaged a monthly gain of 5.1% since inception — more than double the second-best month of the year (December). That’s followed by an average April gain of 1.9%,” reports Schaeffer’s.