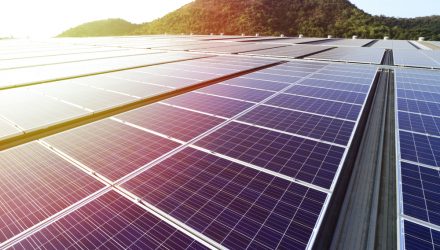 Why Solar Stocks Are Rallying Against All Odds

Watching the news is one of the most dangerous things you can do as an investor. I know it’s counterintuitive. After all, most investors want to be as informed as possible. But watching CNBC or any other financial media outlet won’t give you an “edge.”

Most news is “priced in” long before the talking heads cover it. In other words, investors who act on news are usually late. The mainstream media also fixates on bad news. And it’s no secret why: fear sells. But it’s not just the talking heads on TV that you need to worry about.

The news you read online can be just as destructive to your wealth. You probably would have sold all your stocks back in March if you listened to all the negative headlines! This is why I never watch the news.

I Focus on “Price Action” Instead

Price action tells me how stocks are behaving. It lets me know if they’re ready to rip higher, or crash. You can see this behavior by looking at charts.

As a trader, I look at hundreds of charts on any given day. I do this because price is objective. It doesn’t have an agenda or political bias. Instead, it reflects what investors are actually doing with their money.

And that’s the only thing that matters. Everything else is just noise. Today, I’ll show you how focusing on price alerted me to a huge opportunity in solar stocks. I’ll tell you why solar stocks are likely headed much higher.

Solar Stocks Are Part of the “Green Energy” Revolution

This is one of today’s biggest megatrends. Megatrends reshape the world. They often play out over years, sometimes decades.

The rise of the internet, the “digitization” of money, and the explosive growth in social media are some of the biggest megatrends of the last decade. Savvy investors who got in on these megatrends early made an absolute killing.

Online retailer Amazon (AMZN) has skyrocketed more than 12,000% since going public in 1997. Bitcoin, the world’s most popular cryptocurrency, has soared more than 2,000% since the start of 2015. And social media giant Facebook (FB) has spiked 400% since its 2012 IPO. Five years from now, solar companies will be mentioned in the same breath with these “hall of fame” stocks.

And Yet, the Solar Industry’s Been Getting Nothing But Bad Press Lately

Look at this headline that the Los Angeles Times published last month.

Morgan Stanley (MS) analysts also projected a 48% drop in residential solar demand for the second quarter! For the third and fourth quarters, it’s forecasting declines of 28% and 17%, respectively.

Not only that, the Solar Energy Industries Association (SEIA) projects the US solar industry could lose nearly 114,000 jobs through June due to a “significant contraction in the residential installation sector.” That would erase five years of job growth for the industry! 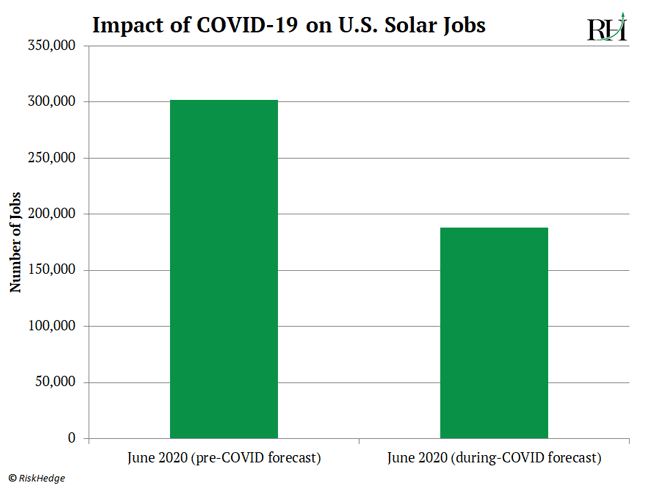 Google “solar stocks” and you’ll find dozens of scary stories like this.

So, you’d might think I’m avoiding solar stocks like the plague. But I actually invested in Enphase (ENPH) a few weeks back. Enphase is one of my top solar stocks and one of today’s strongest stocks period. Its stock price has surged nearly 9,500% since 2017!

Enphase isn’t just leading a megatrend. It’s also a phenomenal business. Its sales and profits are both growing at more than 100% per year.

Still, I didn’t buy Enphase for any of those reasons. I bought it because its price action was so bullish. After selling off in March, Enphase quickly reclaimed its 200-day moving average.

In short, Enphase was still in an uptrend despite the market meltdown and steady stream of bad news about the solar industry. Since bottoming in March, Enphase has surged more than 170%! That’s nearly five times the S&P 500’s return over the same period. 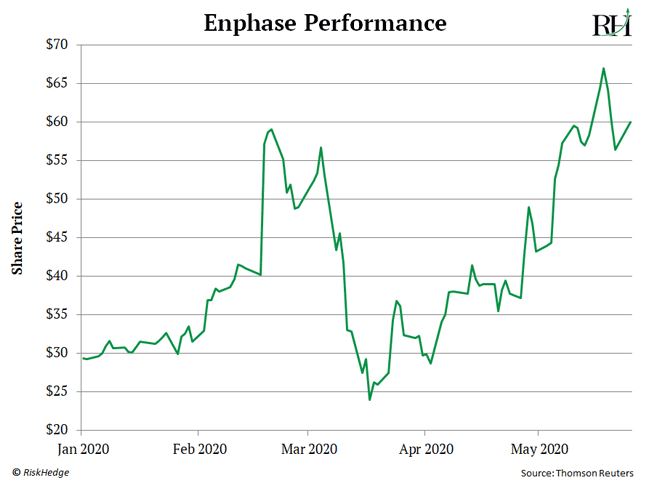 Look at this chart of SolarEdge (SEDG)—another one of my top solar energy stocks. It’s rocketed 100% higher since March! It’s trading now within 1% of all-time highs. 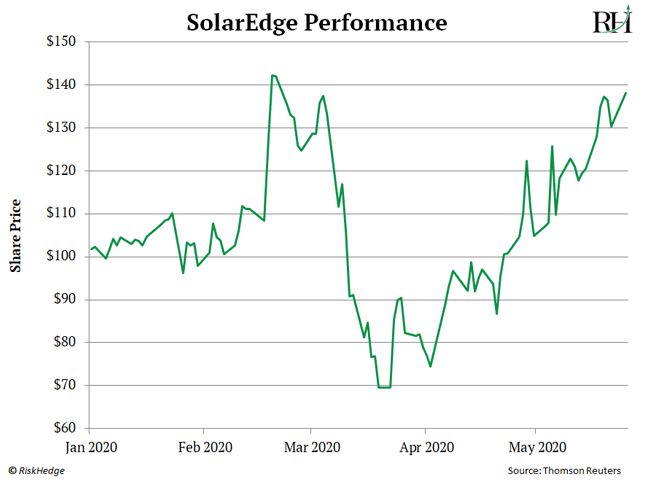 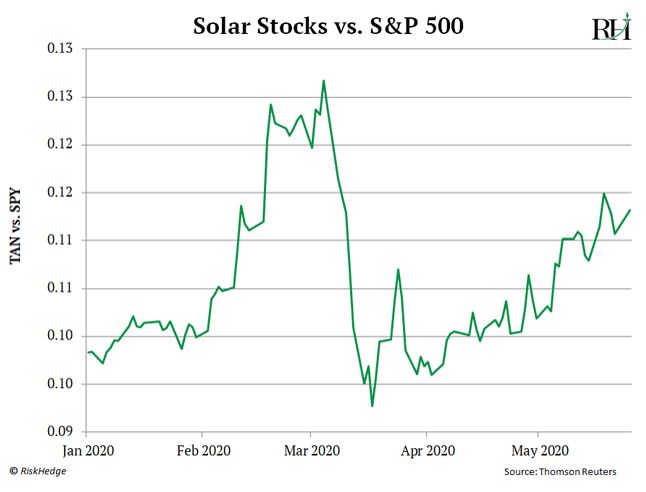 Solar stocks have left the broad market in the dust since US stocks bottomed in March. They’re leaders in every sense of the word. And those are the only stocks I want to own. Of course, you’re probably wondering:

Why Would Solar Stocks Be Rallying in the Face of All This Bad News?

Have investors lost their minds? Absolutely not. Instead, the “smart money” sees the big picture. They understand that it’s still the early days for solar energy.

Solar panels cover just 6% of the world’s rooftops worldwide! In the US, solar accounts for just 1.5% of US electricity. That will change in a big way.

Since 2009, the cost to produce electricity using solar has plunged 90%. It’s now cheaper than many “dinosaur energy” sources. By 2022, the cost of solar is projected to fall by as much as 34% more!

This is a big reason why the SEIA expects the total capacity of solar panels to more than double over the next five years. Not only that, the International Energy Agency (IEA) expects green projects to roll out at the fastest rate in four years. In other words, this industry isn’t slowing down. It’s accelerating!

The smart money sees where things are headed. That’s why it took advantage of the recent sell-off by loading up on solar stocks.

Unfortunately, many everyday investors did the exact opposite. They panic sold their solar stocks because they listened to all the bad press. They lost sight of the big picture.

But don’t worry if you missed out on this initial surge. The future of solar energy remains as bright as ever. In fact, I expect solar stocks to crush the broad market for years to come. To understand why, look at this chart. It compares the performance of TAN with the SPDR S&P 500 ETF (SPY). 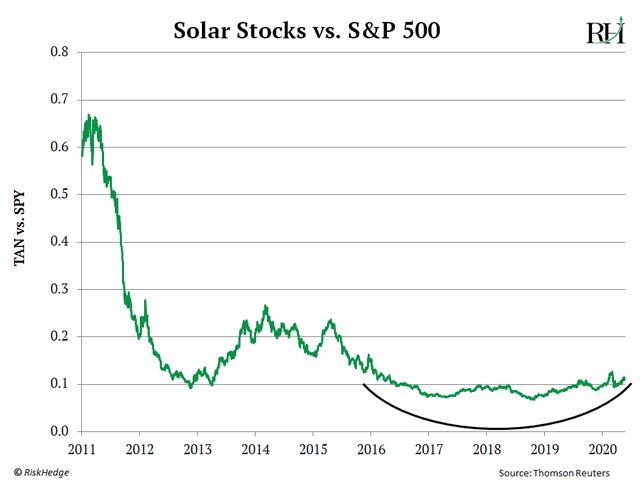 You can see that solar stocks underperformed the S&P 500 for nearly a decade. It wasn’t until late 2018 that the tide turned. Since then, TAN has beaten the S&P 500 by more than five-fold!

That’s significant outperformance. But this key ratio continues to print higher highs and higher lows. This is extremely bullish. It tells us solar stocks should outperform the S&P 500 for years to come.