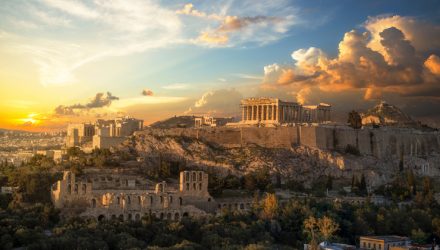 The Global X MSCI Greece ETF (NYSEArca: GREK), the only exchange traded fund dedicated to Greek stocks, is higher by nearly 38% year-to-date, easily making it one of this year’s best-performing single-country ETFs.

The divided politics and a rise in populist sentiment dragged on Greek markets, but after a request by left-wing Prime Minister Alexis Tsipras to dissolve parliament, followed by a scheduled early national election, the country-related exchange traded fund is surging. However, there are other reasons why Greek are among the Eurozone’s most impressive performers.

“At the end of Q2, the markets were up 40.4% making it the best performing emerging market year to date (YTD),” according to Global X research. “Growth forecasts project annualized 2019 GDP at 2.4%, versus the 1.3% forecasted for broader Europe.”

There are some other positive factors to consider, some indicating that the Greek economy is showing legitimate signs of progress.

“There have also been several positive market developments in Greece, which includes falling yields on its 10 year note and its request for early repayment of certain more expensive IMF loans (which have an annual interest rate of around 5% versus the current yield on its sovereign debt that is less than 3%),” said Global X.

Data indicate Greece’s efforts to cleanup what was once one of Europe’s messiest sovereign balance sheets are paying off.

“Greece’s strong equity market returns came amid the ongoing push to clean up bad debt from bank balance sheets,” said Global X. “As a result, financials lead the way as the biggest positive contributor to performance during Q1 and Q2. Causes for optimism in the Financials space include increased liquidity in local financial institutions, with banks having almost fully repaid emergency European Central Bank (ECB) liquidity assistance, yields on the 10-year at an all-time low, and the Greek Ministry of Finance submitting a request in April to make early repayments to the IMF.”

“For sustained, positive performance over the longer term, the banking sector will require further improvements, like the continued reduction of non-performing loans (NPLs) and assistance to banks crippled by outstanding debts,” according to Global X.