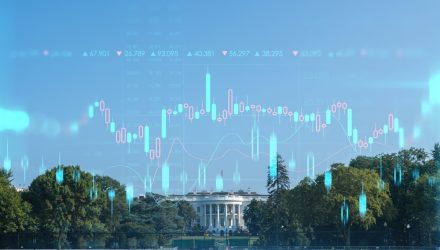 White House Releases $185 Billion for Infrastructure: An ETF to Ponder

While most of the talk in the capital markets is centering on inflation, infrastructure projects are still moving forward despite an increase in material costs. As such, infrastructure-focused exchange-traded funds (ETFs) are worth considering as the White House releases funds from the Infrastructure Investment and Jobs Act passed a year ago.

“The White House on Friday said it has released $185 billion in funding from the $1 trillion infrastructure bill that seeks to fix crumbling roads, expand broadband internet, replace lead pipes and improve the electrical grid,” a Reuters report said.

The underlying index is designed to measure the performance of U.S.-listed companies that provide exposure to domestic infrastructure development. This includes companies involved in construction and engineering, the production of infrastructure raw materials, composites, and products; industrial transportation; and the production and distribution of heavy construction equipment.

Included in the infrastructure act is funding to help bolster the construction of green buildings, which should feed into strength for the Global X Green Building ETF (GRNR). The fund seeks to invest in companies positioned to benefit from increased demand for buildings that reduce or eliminate negative impacts and/or create positive effects on the natural environment, including companies involved in green building development, green building management, and green building technologies and materials.

“The bipartisan infrastructure bill that President Biden signed into law on Nov. 15 is a historic investment in the nation’s roads, ports, water systems, broadband internet access, and other forms of traditional public infrastructure,” the U.S. Green Building Council said in a blog post.

“The bill was written in a strong shade of green, with sustainability and climate provisions integrated throughout,” the blog post added. “This includes billions of dollars for USGBC priorities such as energy efficiency improvements to federal buildings, clean energy upgrades for schools, airport terminal modernization, and EV charging stations. In some places, the bill specifically cites LEED certification as a pathway for demonstrating that a project meets the bill’s sustainability objectives.”