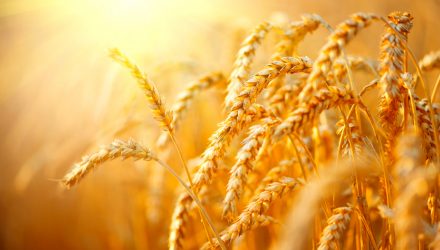 Agriculture traders honed in on the wheat ETF, Tuesday, as prices spiked in response to a number of supply side concerns that are piling in all at once.

There was “some unusually large interest in the wheat markets today,” Sal Gilbertie, President, Chief Investment Officer and co-founder of Teucrium, told ETF Trends, pointing to flash points like Australia announcing a very small export crop, tensions rising in the Ukraine again, and U.S. farmers planting less wheat acres than ever before.

Australia revealed its 2019/2020 wheat harvest missed its forecast and would be the lowest since 2008 as a severe drought wilted crops, diminishing competition to the U.S. in export markets, Reuters reports.

“Wheat is being supported by the forecasts of a much reduced harvest in Australia, although a cut had been widely expected after the poor weather there,” Matt Ammermann, commodity risk manager with INTL FCStone, told Reuters. “Australia is a large wheat exporter and reduced Australian supplies on world markets could open more sales opportunities for U.S. wheat. Wheat is also seeing support from brisk import demand, with purchase tenders from countries including Turkey and Morocco.”

Further adding to the global supply constraints, Gilbertie pointed to reports of locusts swarming from Southwest Asia toward China’s southwestern border, which fueled a sharp rally in China’s wheat futures, along with growing expectations that China will buy U.S.

The U.N. issue a threat warning over a huge swarm of locusts that is migrating across Southwest Asia, prompting fears of a potential crop losses, Agricensus reports.

The migration of desert locusts has traveled from West Africa to India, with an area bordering Pakistan warned of a “significant threat to crops”, according to the UN Food and Agriculture Organization.