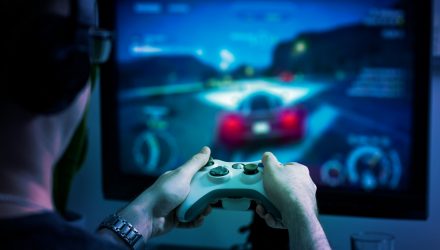 It may be surprising to some investors, but guess what’s holding up well, relatively speaking, as the rest of the market struggles due to the coronavirus? Video games and eSports and ETFs.

Last week, the Global X Video Games & Esports ETF (NASDAQ: HERO) notched a loss that was only half as bad as the S&P 500’s, closed higher last Friday and is still in the green year-to-date.

One catalyst for gaming equities has been a variety of data points confirming that Chinese gamers are buying more video games as they are forced to stay inside due to the COVID-19 outbreak. However, there’s more to the story for HERO and rival funds this year.

“Many malls and stores remain shut and sales of cars and smartphones are crumbling, but demand for health, entertainment and cosmetics products is buoyant, according to data from e-commerce giant Alibaba,” reports Reuters.

“Both Microsoft and Sony are expected to release the new Xbox and PlayStation consoles this upcoming holiday season, representing the first major hardware upgrades since 2013,” said Global X in a note out last Friday. “The new consoles are expected to feature 8K TV support, ray tracing, and solid-state drive (SSD) storage – enhancements that will bring unprecedented realism to games and faster load times. Other details are still kept under a tight lid by the manufacturers.”

“Historically, the release of a new console generates positive spillover effects for game developers. After all, what’s a cutting-edge console without a new game that can take advantage of those features?,” according to Global X. “New titles expected to be released include the latest iterations of established franchises like Battlefield 6 and The Sims 5, while others are expected, but still to be confirmed, like GTA 6 and Assassin’s Creed Ragnarok.”