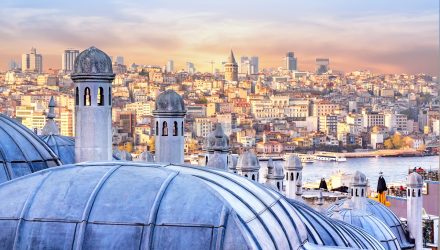 Turkey country-specific exchange traded fund was among the worst hit on Friday’s sell-off as the broader risk-off mood coupled with the plunge in the Turkish lira currency dragged on this emerging market.

The iShares MSCI Turkey ETF (NasdaqGM: TUR) was among the worst performing non-leveraged ETFs of Friday, plunging 10.5% and breaking below its long-term support at the 200-day simple moving average.

On top of the broader risk-off selling that plagued the markets on Friday, Turkey’s market was dragged down by an ongoing rout in the wake of an unexplained drop in official reserves, despite the Turkish central bank’s surprise tightening to stem the fall.

The lira currency briefly pared losses after the central bank announced steps to push lenders towards more expensive overnight borrowing facility, but the market quickly lost steam amid mounting speculation the falling reserves means the central banks is using its holdings to support the currency before elections on March 31, Bloomberg reports.

The Turkish currency plunged 6.1% against the greenback to TRY5.821 on Friday.